In our quest to find new CPU benchmarks we were told about Novabench by members of the #SiliconGang on Twitter. Novabench has been around since 2007 and is a free benchmark application that has been used by millions of people. We’ve never ran this benchmark here on Legit Reviews, so we figured that we’d give it a shot.

Novabench tests your computer’s performance in minutes. Your computer’s Novabench Score is easy to compare online – letting you know if your computer isn’t running as well as it could be, or helping you make informed upgrade decisions. 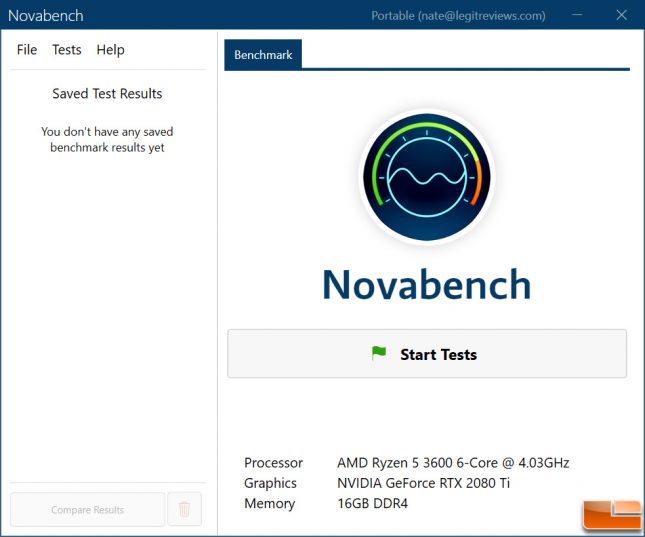 The first thing we noticed with Novabench is that this benchmark utility is it tests the CPU, GPU, RAM and your storage drive. It does this by running a total of six tests and is extremely fast. How fast? 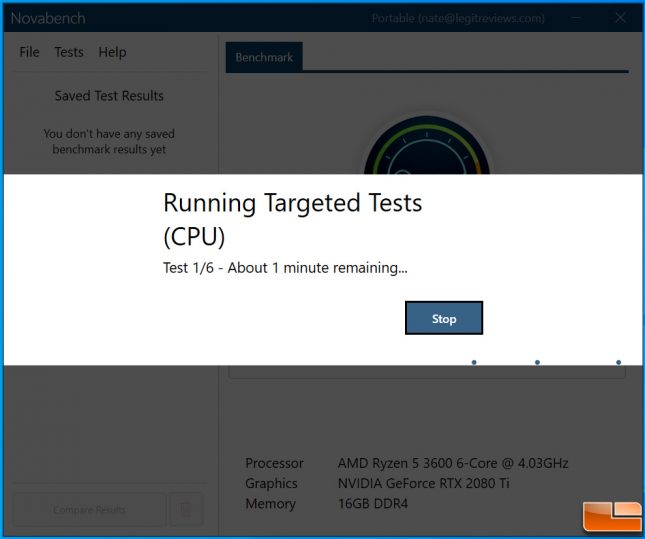 We fired up the stopwatch app on our phone and found that running Novabench was taking about 70 seconds! After the benchmark completes you are given an overall Novabench score and also shown scores for each of the four sub system tests that it completes. This is one of the quickest system benchmarks that we have ever run! 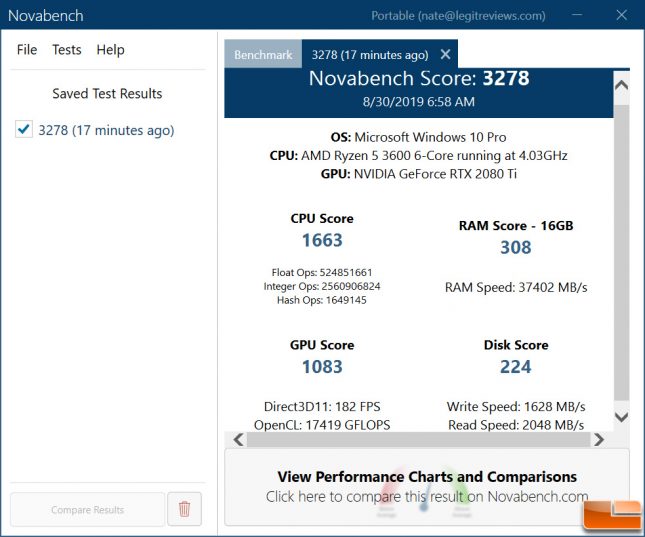 You are also given the scores within each subtest, so you end up with 13 data points from this one benchmark that takes roughly a minute to run. You can then view performance charts and go online to compare your results to others and find out how your system stacks up.

We gave Novabench a try, but we weren’t exactly sure what the Novabench CPU test was doing. After digging around the Novabench website and found out a little more information from the documentation page.

We then reached out to the author of Novabench asking for more technical details on what exactly his CPU testing was doing. The author was more than happy to help and explained to us over e-mail that Novabench was developed to be a benchmark tool for a broad audience, not necessarily people interested in the technical complexities of benchmark testing. That said, we were quickly given a little more information about what is going on in the benchmark after being informed that we were the only person/site to ever ask for detailed testing information.

So, now that we have a better feel for what Novabench is doing we can get to benchmarking! For testing we will be comparing an Intel Z390 desktop platform to an AMD X570 desktop platform with six processors from each company at several different price points. Windows 10 Pro 64-bit v1903 with all updates as of 8/26/2019 was the operating system used and all the drivers were updated. Both systems used Corsair Hydro Series H115i PRO liquid CPU coolers and the same 1TB NVMe SSD.

Here are the benchmark results (averaged of 5 runs) of the CPU workload in Novabench v4.0.6: 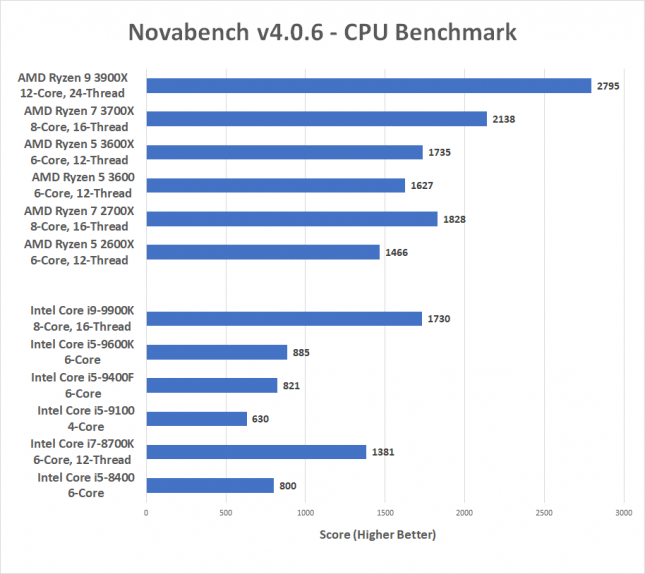 We asked the author of Novabench if he has ever worked with AMD, Intel, Qualcomm or ARM on any optimizations and if he’d consider his benchmark is fair in this day and age. Legit Reviews was given the following statement.

“I believe Novabench is fair. The implementations are based heavily on established prior art, and all tests use instructions that are mature across vendors. I have never worked with any vendor, such as Intel, AMD, NVIDIA, etc. I believe I have no conflicts of interest in that aspect or otherwise.” – Novabench 08/29/2019

So, there is another benchmark utility that we have never used before with some interesting results. We’d also like to thank Novabench for discussing their benchmark application with Legit Reviews. They were happy to go on record about their benchmark and that is refreshing.

If you want to try Novbabench out you can download it for free here. They also offer Novabench Pro for $19 with additional features like battery wear and temperature tracking, scheduled tasking, CLI and more.