Intel is announcing the 10th Gen Intel Core S-Series processor today, which is what they are calling the world’s fastest gaming processor. Legit Reviews attended over a conference call that went over a press briefing for this series and wanted to share with you what we learned. The three key goals for the 10th Gen Intel Core S-Series desktop processor (Comet Lake) were speed, new hardware and software features for the enthusiast community and lastly delivering the best real world performance or use case experience.

What does that exactly mean to have the best real world performance? Brandt Guttridge, Intel Senior Director of desktop and workstation product marketing, explained to us that it isn’t a specific benchmark or series of specific benchmarks, but rather it depends on the context of the person using the system. From his perspective it would be a user trying to do something that they could not do before, do it faster and more efficiently or to a better degree. So, if it is gaming can you get a higher frame rate? On strategy based games, can the CPU turn go faster? Real world performance for Intel is figuring out how to push the envelope and deliver more value for each system user. And with that, the new 10th Gen Intel Core i9-10900K is already being shown as the ‘World’s Fastest Gaming Processor’ in the presentation.

Intel then jumped into why clock frequency matters for processors. Intel said that frequency ends up being one of the fundamental capabilities that pushed real world use cases. The new Intel 10th Gen Intel Core S-Series desktop processors clock up to 5.3 GHz on the Core i9 part. Intel feels this will give them a leadership position and allows them to deliver the fastest gaming CPU on the planet. A large number of games are optimized for single-core processors, so having higher clock frequencies is a huge factor in delivering the best performance. Intel also noted that competitive gamers want the lowest latencies possible and once again faster processors will help reduce latency.

On the next slide Intel focused on having the best overclocking experience. Intel wanted to really embrace the overclocking community and is introducing new capabilities and features for the those that overclock. 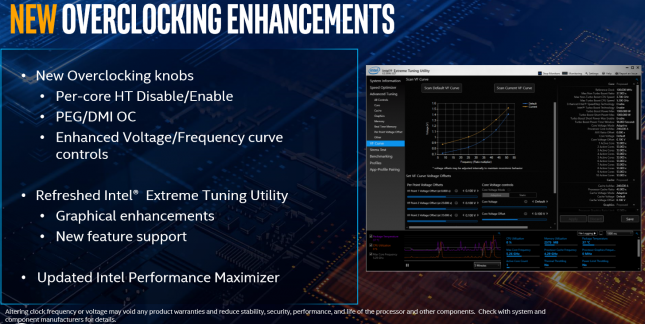 Of the new overclocking knobs on the 10th Gen Core processors, first and foremost is per-core Hyper-Threadring (HT) enabled/disable. Intel believes that this is interesting and impactful for this overclocking community since it allows for a fine degree of control that nobody else in the industry is doing today. It allows end users to pick and choose what core count and thread count that you would like to operate at. Disabling Hyper-Threading will reduce heat, so if you are only running say 12 threads, you can disable the HT on some cores for better thermal headroom. Less heat means that you can stay in the turbo power start longer and that will allow you to possibly break overclocking records or just have better performance.

So, the key use of per-core HT disable/enable would be to optimize performance of benchmarks/applications that are threaded in-between the non-HT and HT thread count of the processor that you are running. For example, the CPU test found in 3DMark06 uses up to 16 threads. If you are running a Core i9-10900K 10-core, 20-thread processor, then you’d ideally you want to run 10 real cores plus 6 hyper threaded threads. If can disable the 4-threads on the worst performing cores that are not being used. If you do nothing, the OS will select the cores and threads that are used and could possibly result in lower performance.

Intel is allowing PEG/DMI overclocking and says that it will allow you to get more throughput or capability from your discrete graphics card. Intel is also is also offering enhanced voltage/frequency curve controls. These features will be made available in a refreshed build of the Intel Extreme Tuning Utility as well as third party applications. Intel also updated the Intel Performance Maximizer, which is their automated processor overclocking software utility.

One of the big changes for 10th Gen Intel Core is die thinning. The overall Z-height of the of the CPU and IHS is not changing, but the actual silicon is being thinned on the die itself. This allows the copper on the IHD to be thickened. The combination of the thinner die and the thicker IHS (integrated heat spreader) is said to improve heat transfer.

Intel is calling this new processor technology Thin Die Solder Thermal Interface Material (Thin Die STIM) and it will be used on select SKUs in the 10th Gen Intel Core desktop processor lineup. Legit Reviews has confirmed this process technology will be used on the unlocked Core i9-10900K, Core i7-10700K and Core i5-10600K processors. Intel is not disclosing specific die information and declined to talk about how many microns of insulator that they removed from the die used on Comet Lake processors. 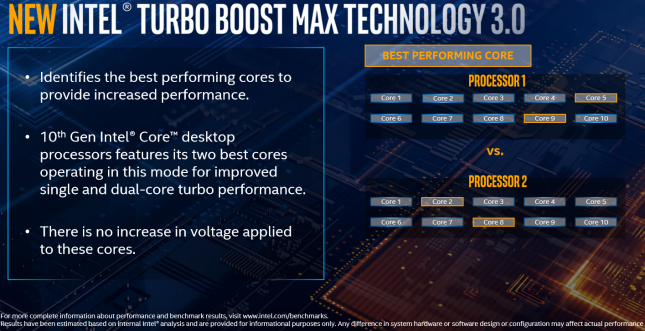 Another first for a client platform is going to be the introduction of Turbo Boost Max Technology 3.0. This is something that was introduced on the Intel X299 and Xeon platforms in the fall of 2019 and it is now coming to mainstream platforms. No two CPUs are identical, so Intel is testing and identifying the two best cores on each Comet Lake S-series processor. With the most recent builds of Windows 10 the OS is able to identify and use these cores for improved single and dual-core turbo performance. This information is also highly valuable for overclockers! 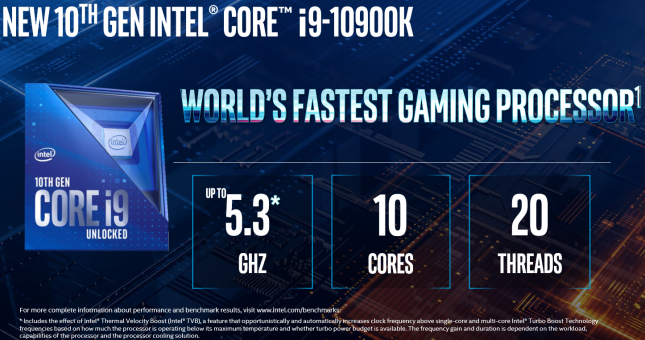 The lead processor for this series is the 10th Gen Intel Core i9-10900K 10-core, 20-thread processor that is capable of turbo clocks up to 5.3 GHz. That 5.3 GHz is a dual-core turbo mode and not just for a single thread. 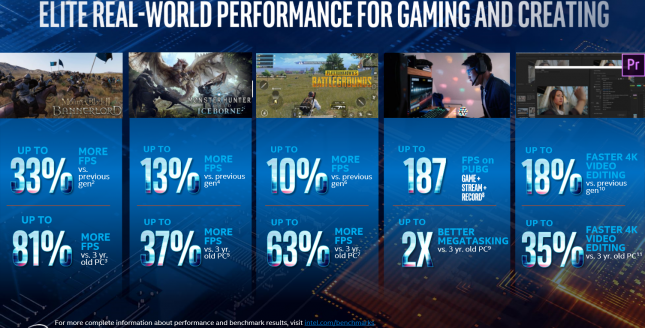 Intel then showed us a page of performance numbers that compared the new 10900K to last years 9900K and then a 3-year old PC with a 7700K processor. The top line is the performance advantage to the 9900K and the bottom line would be against the 7700K. All three systems were powered by the NVIDIA Geforce RTX 2080 Ti graphics card. Intel is seeing double digit gains across the board with the Core i9-10900K versus the Core i9-9900K for both gaming and content creativity benchmarks. 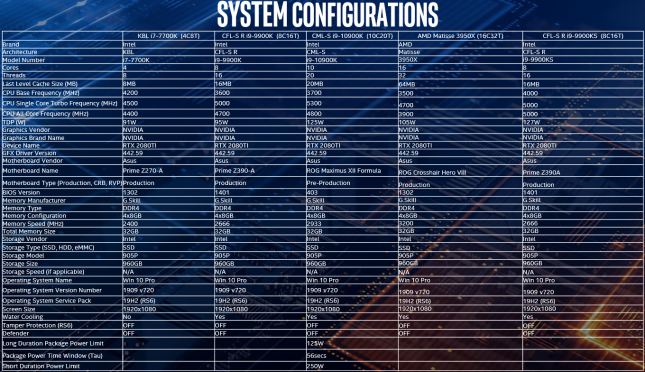 You can check out the system configurations that were used for these tests above. 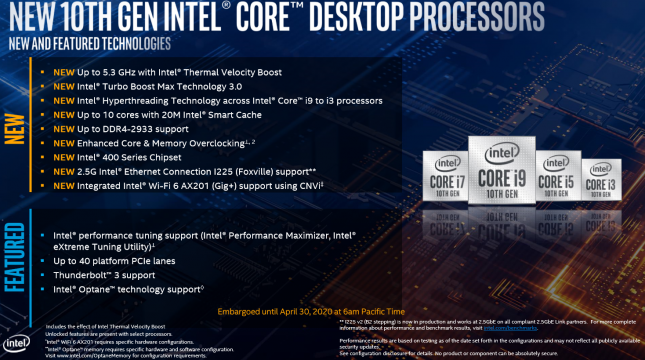 The next slide in the presentation covered the new features and technologies of the 10th Gen Intel Core Desktop processor series. This is the first time Intel is talking about the new Intel 400 series chipset with the media. The Intel 10th Gen Intel Core S-Series processors are LGA1200 processors, so they will need a new CPU socket. There is no change in CPU cooler compatibility, so all current LGA1151 CPU coolers will work. The big thing to know here is that you’ll need an Intel 400 series board to run one of these processors. 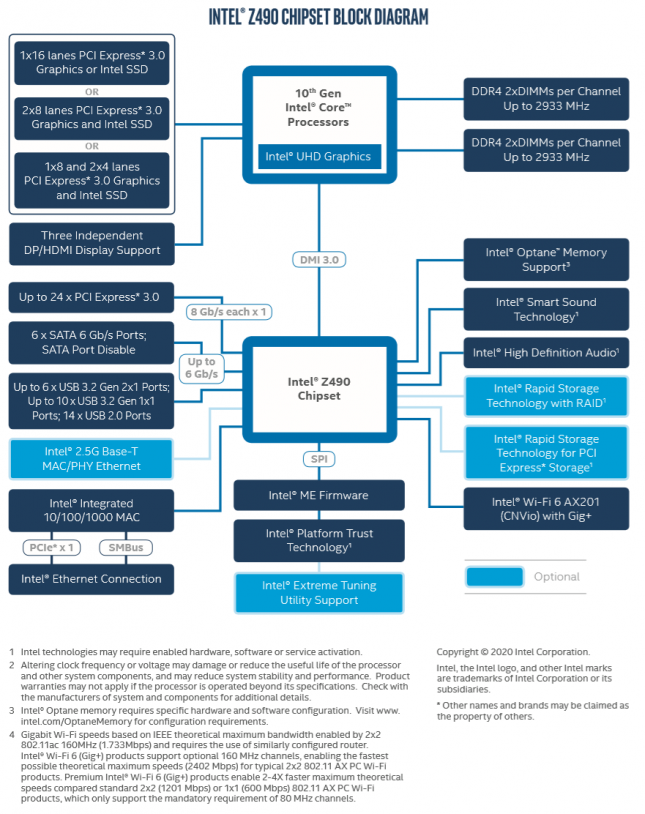 The Intel Z490 chipset is the model aimed at enthusiasts and high-end users. New features include the LGA1200 CPU socket, 2.5G Intel Ethernet Connection I225 support, integrated Intel Wi-Fi 6 AX201 (CNVio) with Gig+ and support for DDR4 2933MHz memory. The number of PCIe 3.0 lanes remains at 40 just like the Intel Z390 chipset and there is no official support for any PCIe 4.0 lanes shown on the Z490 block diagram. Motherboards using the H410, H470, B460, Q470, and Z490 chipsets will begin being announced today.

Intels 10th Gen Intel Core Processors do not support PCIe Gen 4.0. But, Intel told us that their motherboard partners are free to add features they want to their products. Intel declined to comment on our future product plans or compatibility for the Z490 platform. Legit Reviews reached out to motherboard maker ASUS and they told us to that many, not all, of their ASUS Z490 motherboards have been engineered for PCIe 4.0 readiness. Full validation cannot be performed though as Intel has not released CPUs with PCIe 4.0 capabilities. ASUS has chosen not to proactively market that their boards may have PCIe 4.0 support due to this reason and the fact that Intel’s next-gen processors are under NDA. 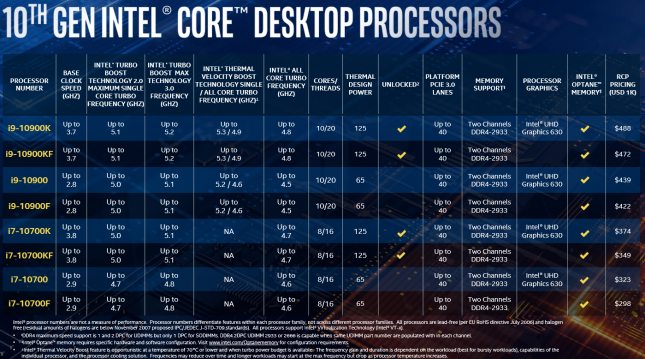 In order to reach 5.3 GHz on the 10900K or the 10900KF you’ll need to Intel Thermal Velocity Boost (TVB) to kick it up a notch. For 10th Gen Intel Core desktop processors, Intel Thermal Velocity Boost feature is opportunistic at a temperature of 70C or lower and when turbo power budget is available. The frequency gain and duration is dependent on the workload, capabilities of the individual processor, and the processor cooling solution. Frequencies may reduce over time and longer workloads may start at the max frequency but drop as processor temperature increases. TVB is only found on the Intel Core i9 series.

The default power limits for the K-Series processors are as follows. Please note that motherboard makers can optimize their boards differently in the UEFI. 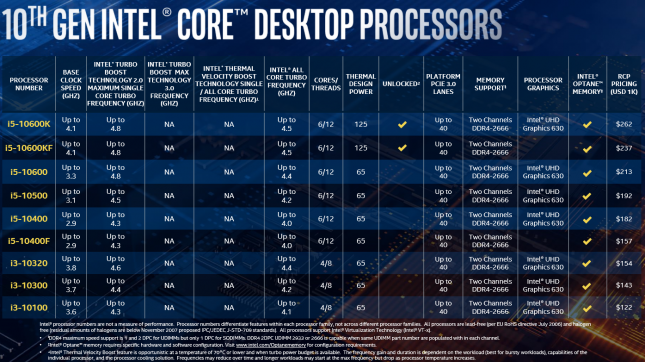 If you are looking for spend under $100 for a processor the Intel Pentium and Celeron lines still exist and are available as dual-core parts with and without Intel Hyper-Threading technology. The Intel Celeron G5900 dual-core processor is priced at just $42. 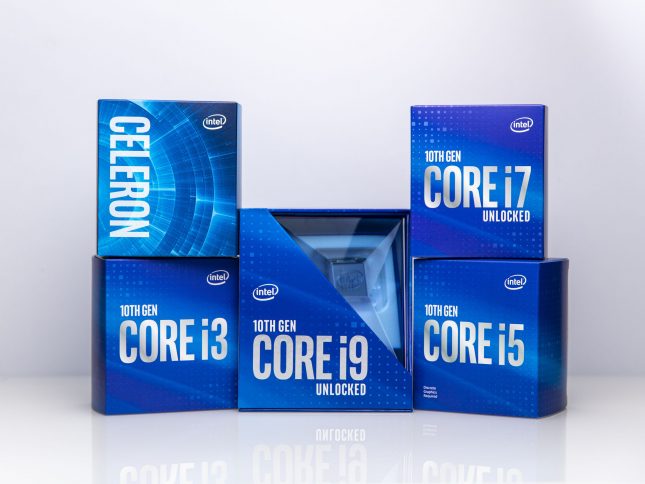 We will have benchmarks of some of the new Intel 10th Gen Core ‘Comet Lake’ processors next month, so stay tuned!